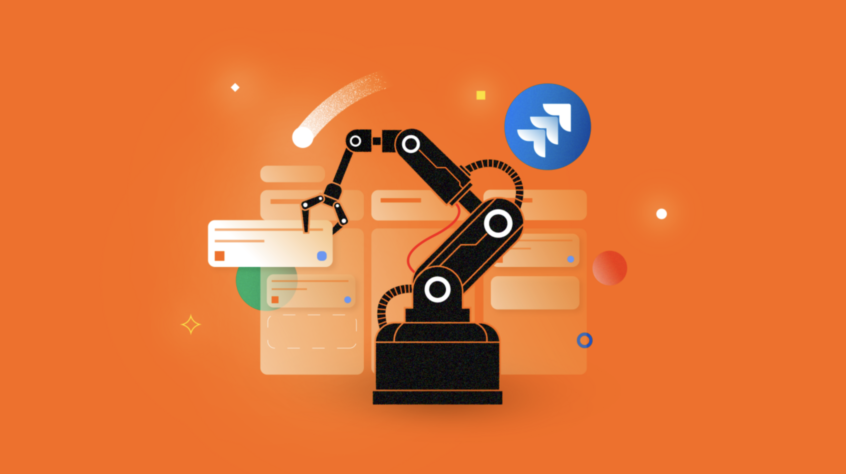 Jira is a supremely powerful task tracking tool, which allows you to manage work and workflows at scale. Beyond that, though, the platform enables you to work faster and smarter. And that’s where automation comes in…

What is automation for? 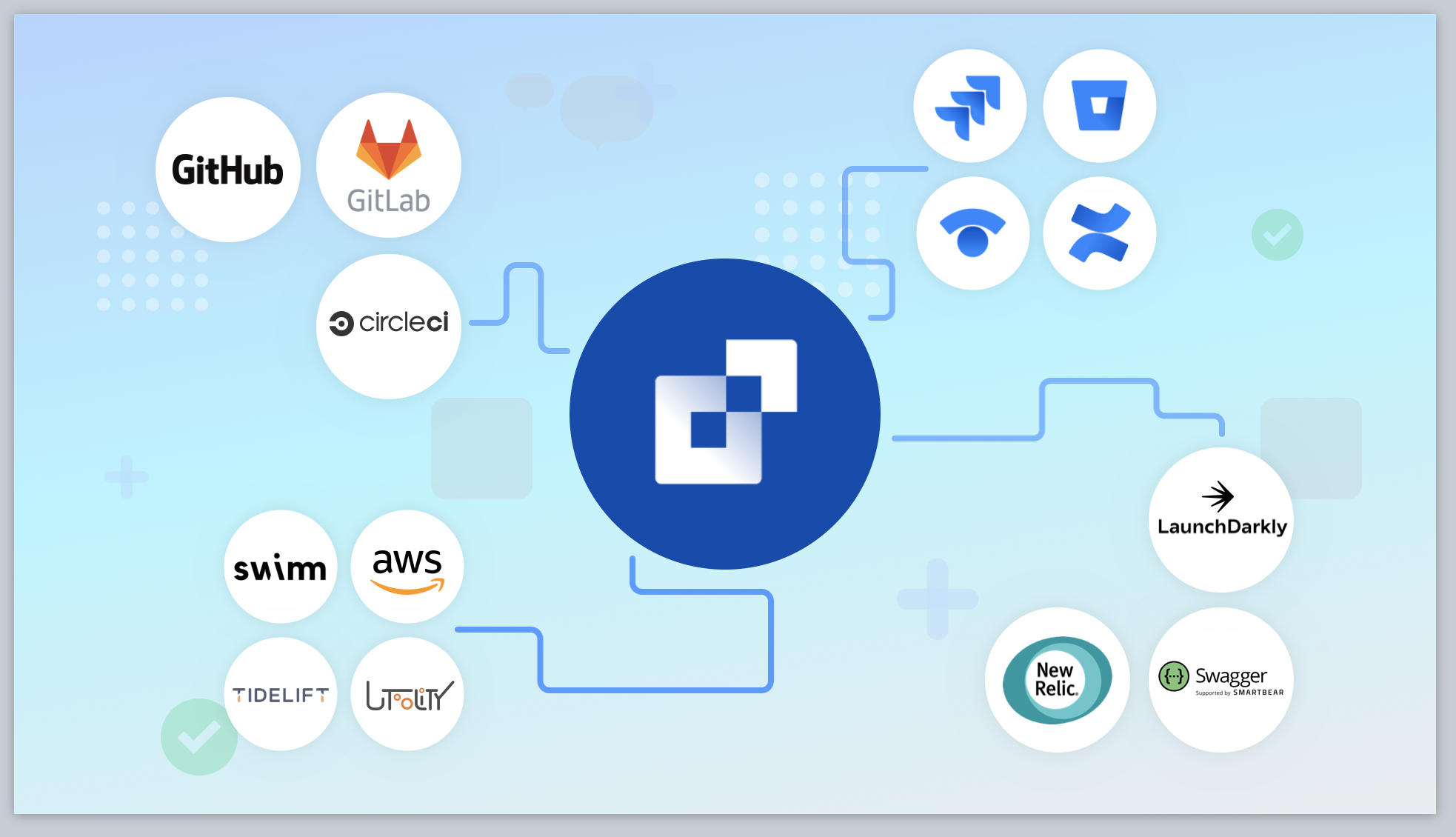 You can automatically take care of simple, repetitive tasks by building automation rules into your Jira instance. This means that your team can prioritize high-value items, rather than having to spend time on busy work such as manually escalating issues, closing old tickets, or changing statuses when issues are progressed.

And this scales up. Jira’s automation tools make it easy to create complex systems that respond to a range of triggers, which could – potentially – progress an issue from creation to completion.

This guide will lay out exactly what you need to know about the types of automation on offer and how to get started – as well as some ideas about how these tools could be suited to your needs. So let’s get started! 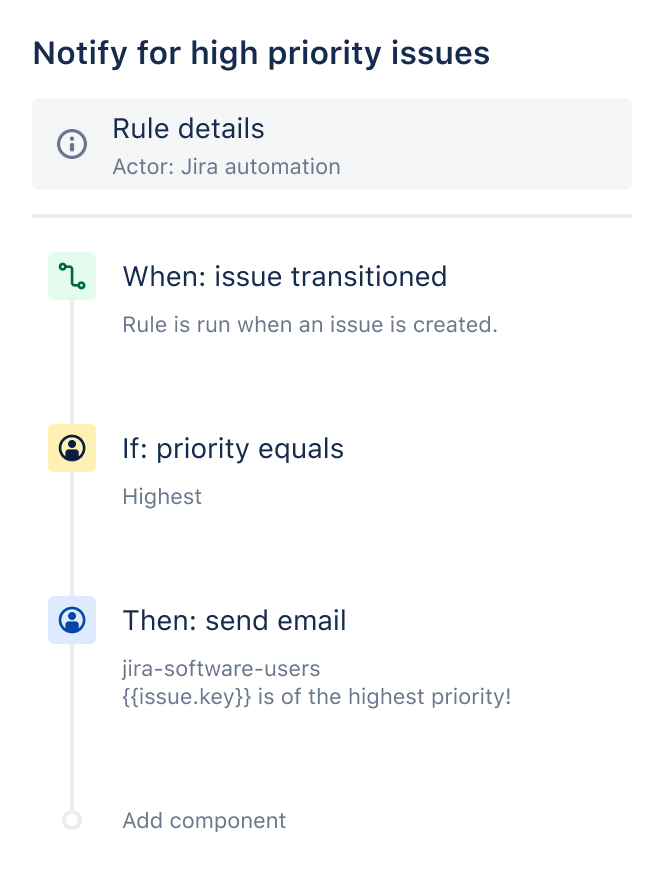 To set your automation process in motion, you’ll need a rule. Rules automate actions based on your instructions.

Rules have three components, which define what happens and when:

Triggers: Triggers wait for defined events to take place in your Jira instance and will then execute the automation rule. You can set triggers to run on a schedule or as needed. General triggers include: 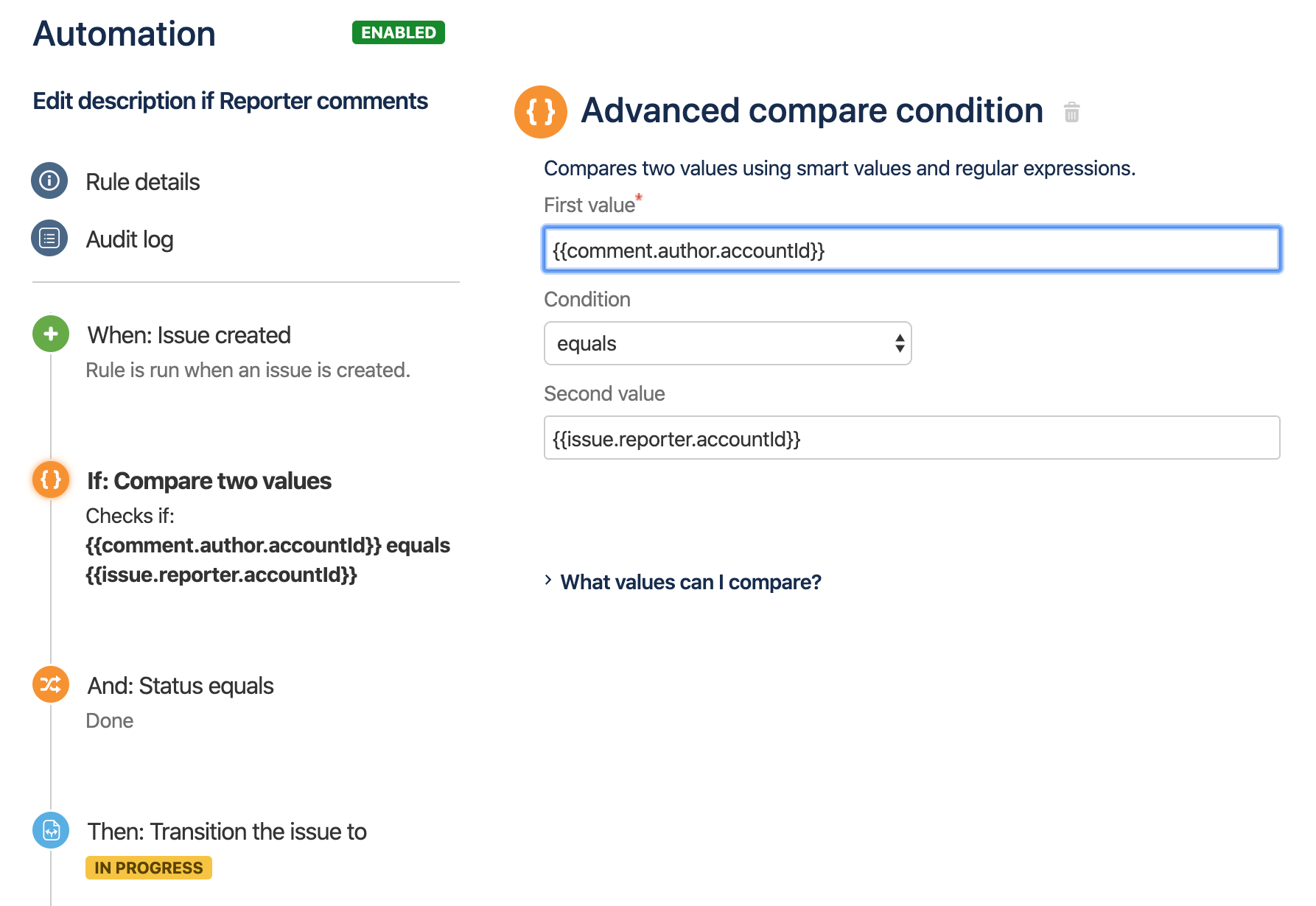 Conditions: Conditions allow you to finetune when your rule will operate. If the requirements of the condition are not met, then the rule will stop. Conditions you can pick from include: 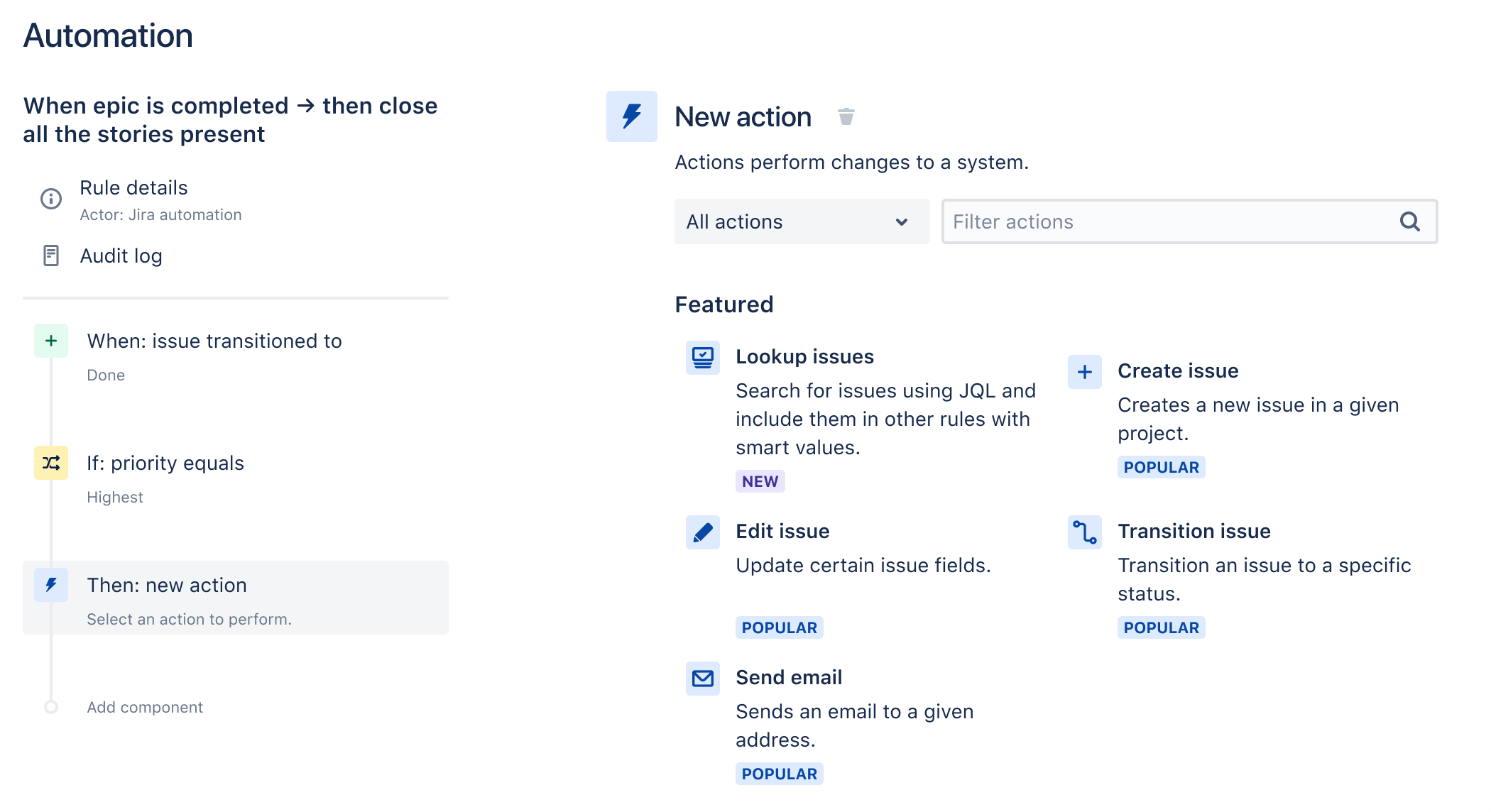 Actions: Actions are the most important part – they actually carry out the process that you want to automate. Actions you can pick from include:

Smart values enhance your ability to access and edit data using your automation rules. For example, you could use the following:

So your rule will reference the current date, plus 10 days. There is a wide range of smart values that refer to issues, projects, lists, text fields, users, conditional logic, date and time, math expressions, and development – and which will significantly boost the power of your rules.

Setting up a Jira automation rule

Now you have all the component parts, we can run through how you would actually set up a rule. 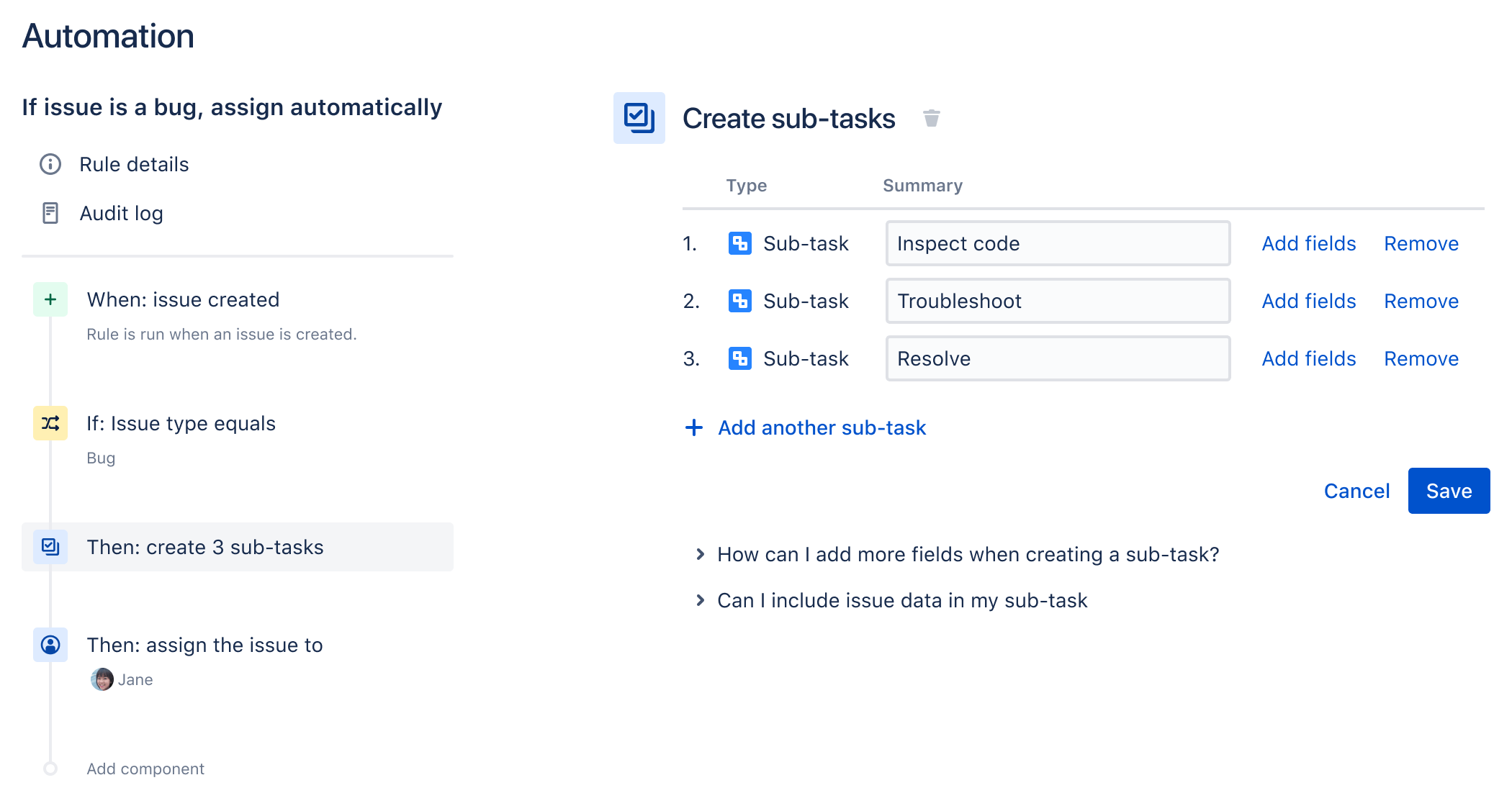 For example, we might create a rule so that when a new task is created, a sub-task is made requiring a team member to check its priority. To do this:

vii) Choose a user as an assignee and save

viii) And finally, name your rule and turn it on – and you’re done!

Every rule comes with its own audit log, which lays out when the rule was triggered, what actions were performed, and the outcome of the process. For additional detail, you can review these metrics by project or globally.

At a more fundamental level, your rules also have a status visible on their status screens: enabled, disabled, or draft. This makes it clear what’s active and what isn’t.

Here are examples of a couple of common use cases that illustrate the potential of automation in Jira. 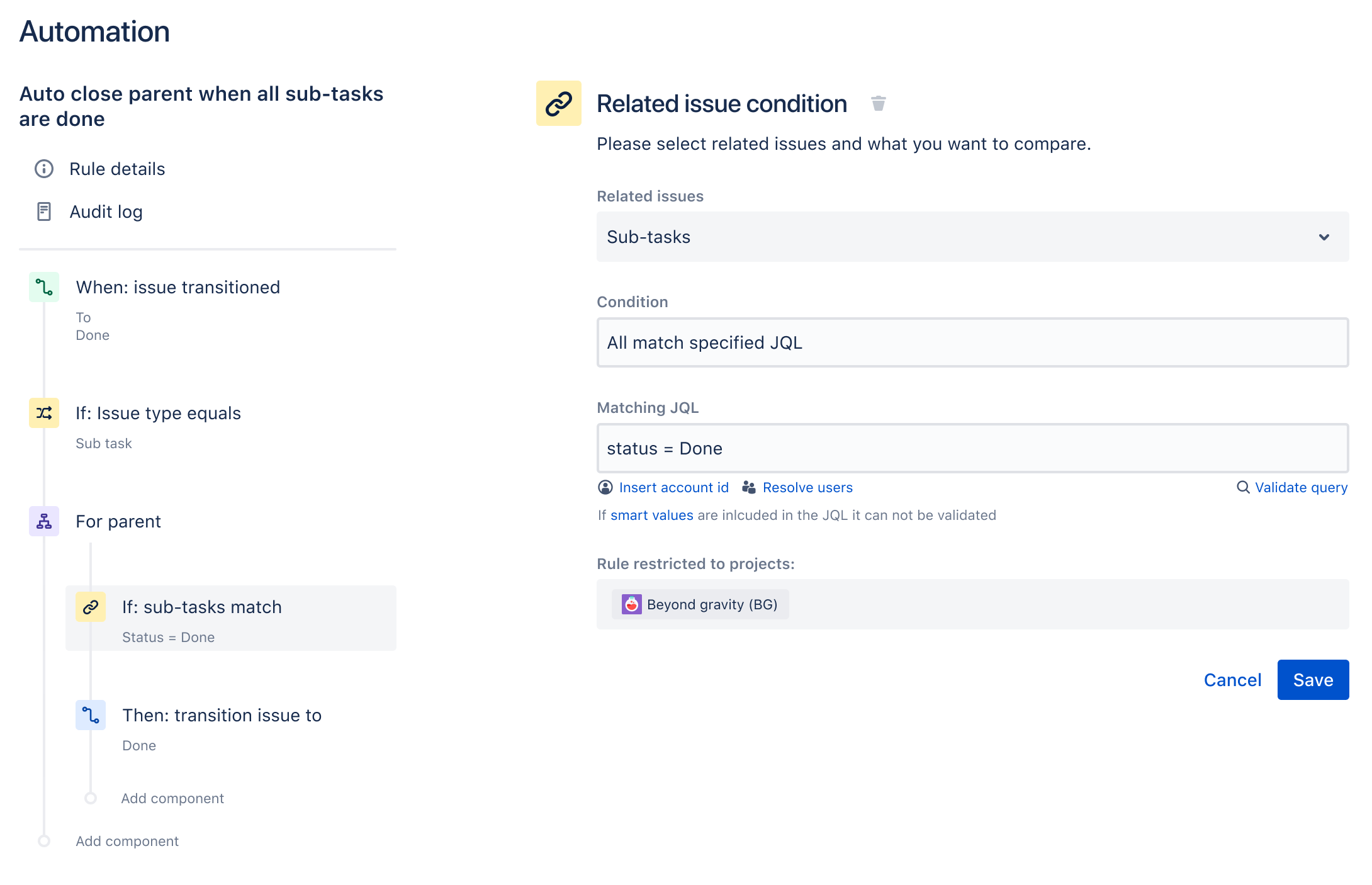 Match up parent issues and sub-tasks: Automation makes it simple to keep sub-tasks and issues synchronized. If you have multiple sub-tasks attached to an issue, for example, then you can automatically transition the parent issue once the last sub-task has been completed. And here’s how to set that up: 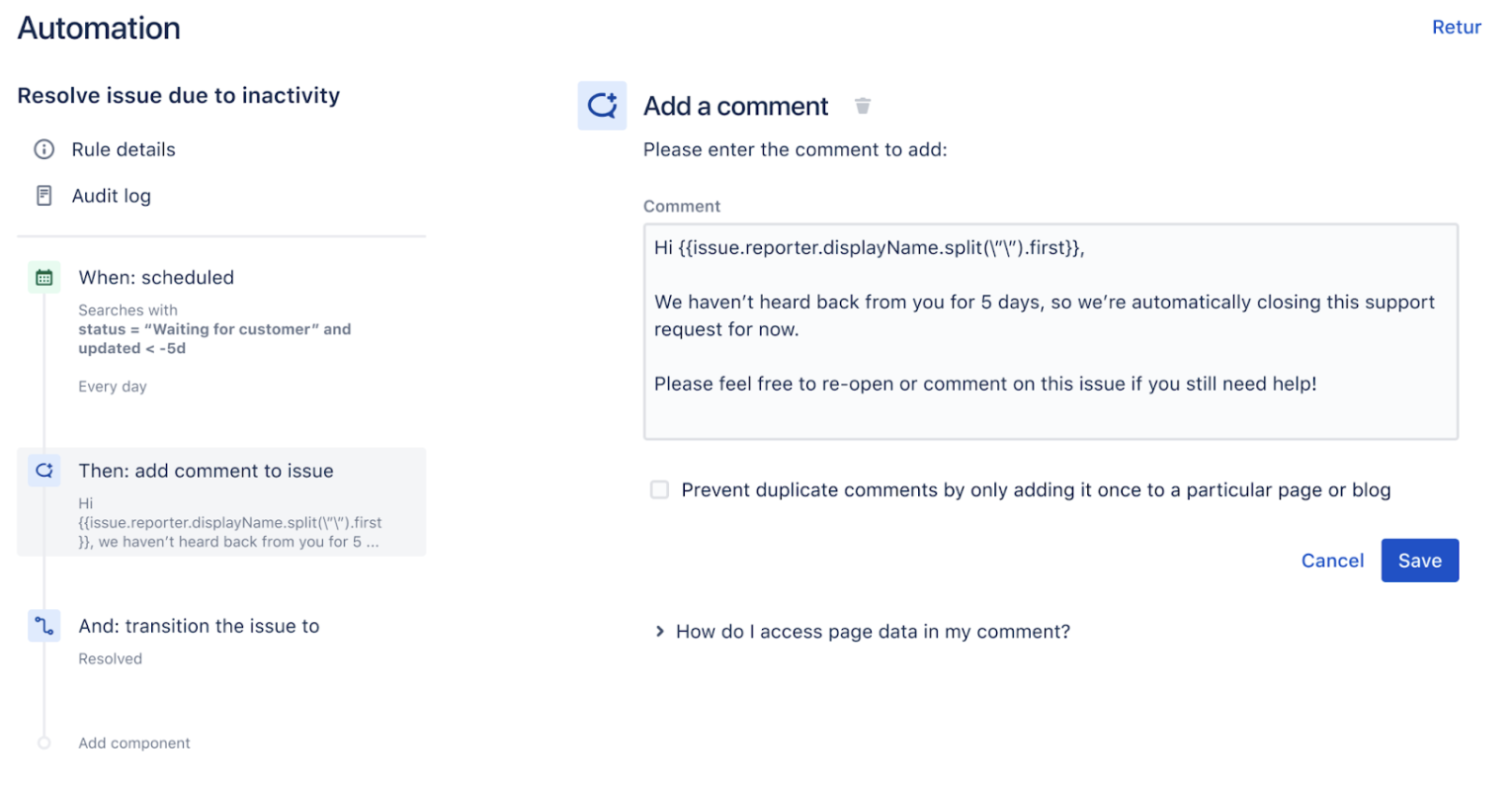 Scheduling tasks: Scheduling tasks, checks, and reminders can quickly and easily help to ensure that your team stays on top of their workflow. For example, if you haven’t received feedback following a query, you might schedule a reminder to be sent, while the issue is closed. To do this:

This guide illustrates just how powerful automation can be – and how it can save your team from wasting time on boring, repetitive tasks, which can instead be handled instantly by the system itself.

A few simple steps can actually shave minutes or hours off the day – and automation rules can help you to better reflect your team’s workflow in Jira, with absolutely minimal effort, while cutting out friction and unnecessary obstacles. Time to accelerate!