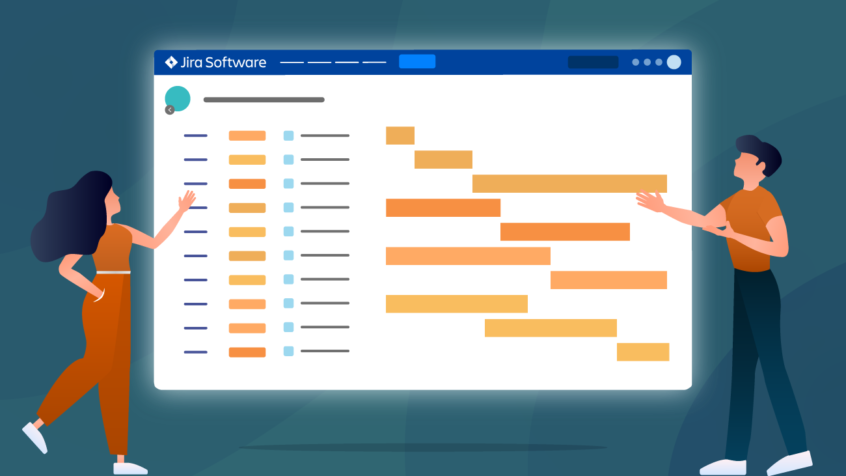 Gantt charts offer a powerful way to visualize, track and manage tasks and projects against a timeline. The bad news, though: Gantt charts are not natively supported in Jira.

Fortunately, that’s not the end of it. The best way to bring Gantt chart functionality to your instance is to use one of the various add-ons that are available, such as Structure. Gantt, BigGantt, and Gantt Chart for Jira. Furthermore, Jira Cloud’s Roadmap feature covers some aspects of Gantt – but it’s not quite the same thing and it doesn’t reach the level of functionality that third-party apps provide.

So what are Gantt charts? Gantt charts follow a left-to-right horizontal timeline that allows users to lay out tasks or projects, block by block, in sequential order.

The format was created in the early 20th century by Henry Gantt and became a popular tool for project scheduling in the traditional industry. Being able to place tasks on a defined timeline, identifying dependencies and setting milestones all made Gantt charts invaluable.

However, moving the format to a computer makes it far more powerful, enabling much more information to be packed in and more complex task relationships to be mapped. What’s more, it can give users complete control over the visual layout.

Why Use Gantt Charts in Jira

Generally speaking, Gantt charts are most useful for managers who need to visualize the blocks of work that make up a project (or for executives laying out the broader picture of the projects on which their organization will be working).

The key property of a Gantt chart is that it can break down complex projects into a clear, manageable series of tasks, set against a timeline. It also illustrates the dependencies between these tasks, while simultaneously labeling assignees and milestones. This can assist in the planning and management of projects, helping to simplify the roadmap and to identify bottlenecks and blockers that may throw the project off course.

It can also be easily communicated to individuals such as executives, making it useful to illustrate the bigger picture over potentially complex workflows where there are numerous parties and stakeholders involved in projects.

Porting this toolset to software form also means that updates and changes can be factored in, so the entire chart can be reworked in the event of delays or rescheduling.

However, teams working on a large number of smaller discrete tasks, or on a task list that is frequently updated (think about user support or bug fixing), may get less value out of using Gantt charts. You can tweak the plan, but you shouldn’t be adding reams of new tasks to it.

Instead, based on the waterfall project management methodology, Gantt charts are about following a predictable path in which project phases follow one after the other in sequence.

This means that they’re not necessarily a perfect fit for Agile teams. Agile comes with a highly iterative approach to project management that focuses on rapid delivery and sees work being regularly reassessed based on user testing and feedback. Nevertheless, few teams or businesses are all-Agile all the time – and it’s standard to apply the waterfall methodology to top-level planning. Many teams follow a hybrid approach, in any case, and the majority of tools that bring Gantt to Jira, such as Structure. Gantt, focus on helping users get the best of both worlds.

Options for Using and Deploying Gantt Charts in Jira 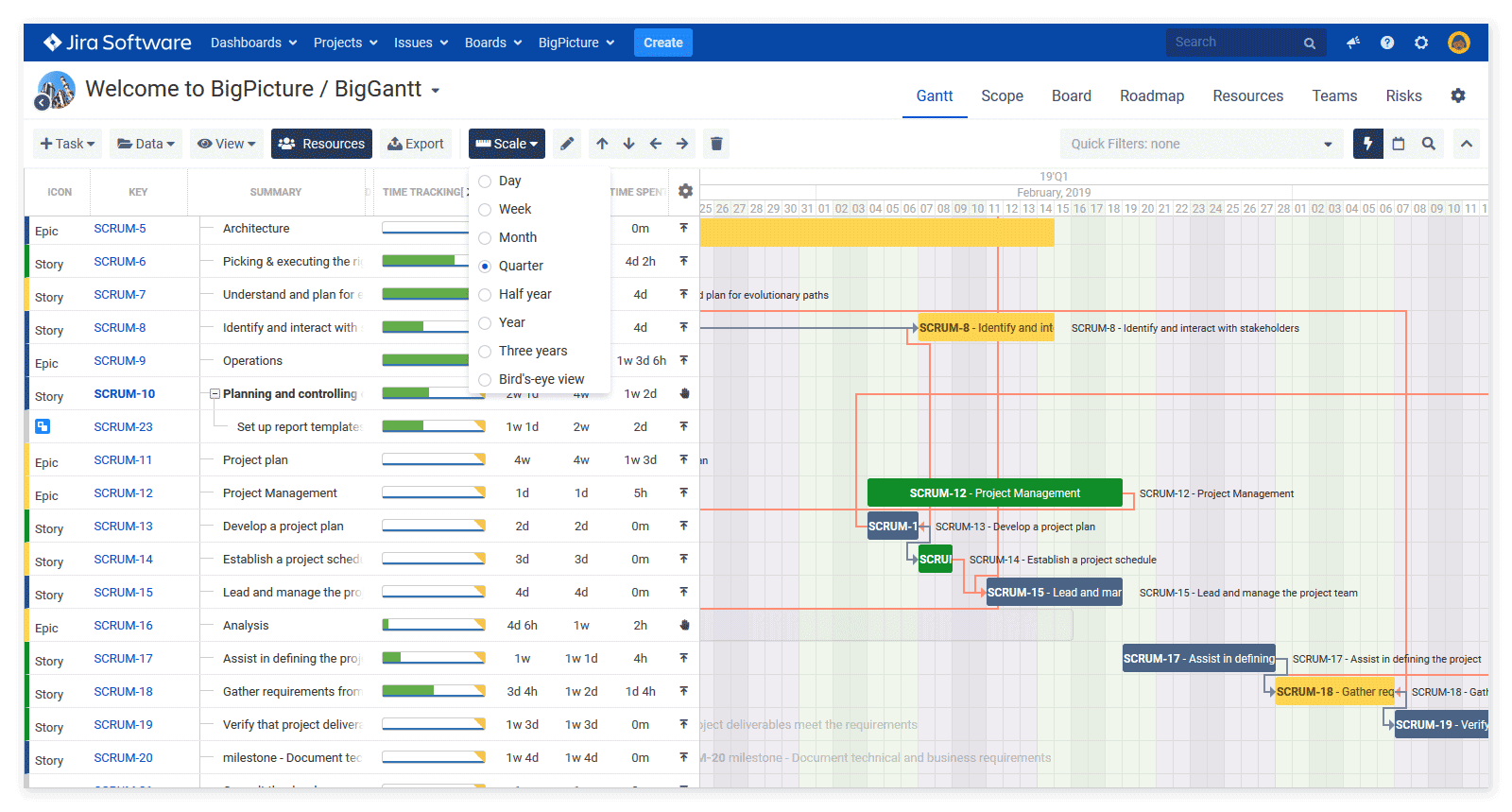 Micro-scale: A Gantt chart can provide a detailed plan for your project, providing timelines and deadlines for every task and sub-task and illustrating the dependencies between them. Setting milestones and critical paths further clarify the direction and the course of the project. Moreover, a collapsible structure provides a simple overview of the project roadmap.

Macro-scale: Gantt charts can also be used at a broader scale to lay out projects across the entire organization and to illustrate the relationships and dependencies between them. This can be a powerful reporting tool to visualize the direction of the business as a whole and its priorities.

There’s also a middle ground that’s possible – mapping sprints from multiple teams and illustrating how projects can come together when the work is split.

If you want Gantt charts in your Jira instance, then you’re going to need an add-on as well. Here are some of the best ones:

As well as enabling you to plan, track and report with Gantt Charts, this add-on (which extends Structure for Jira) aims to deliver Agile Gantt, combining sprint data at the team and portfolio level. The app makes it easy to visualize and manage project timelines, dependencies, and resources – and there’s also a free trial available.

BigGantt focuses on flexibility, supplying a drag and drop interface and filters, allowing users to create and organize tasks directly on the Gantt chart. Task auto-scheduling and smart issue linking further enhance the Agile-compatible app’s functionality, making it an effective solution for tracking and reporting on projects. Cloud, Server, and Data Center versions are all available and you can try it for free.

Gantt Chart for Jira allows you to get an overview of your issues (to 20,000+), selecting by filter or board and across one or more projects. Columns, sorting and dependencies are all configurable – and you can display charts grouped by sprints for agile teams or by epics for product owners. A particularly innovative feature, meanwhile, is the ability to link issues across projects. There is a free trial on offer, but this app is for Jira Cloud only.

An Alternative to Jira Gantt Charts

ProjectManager.com’s Gantt charts is yet an alternative to Gantt Charts for Jira. It emphasizes the visual elements in its design and is integrated with the suite of additional features, including Kanban boards and resource management. Milestones, dependencies, and critical paths are all shown on one dynamic chart. It keeps your project manageable and provides teams with a collaborative online platform. 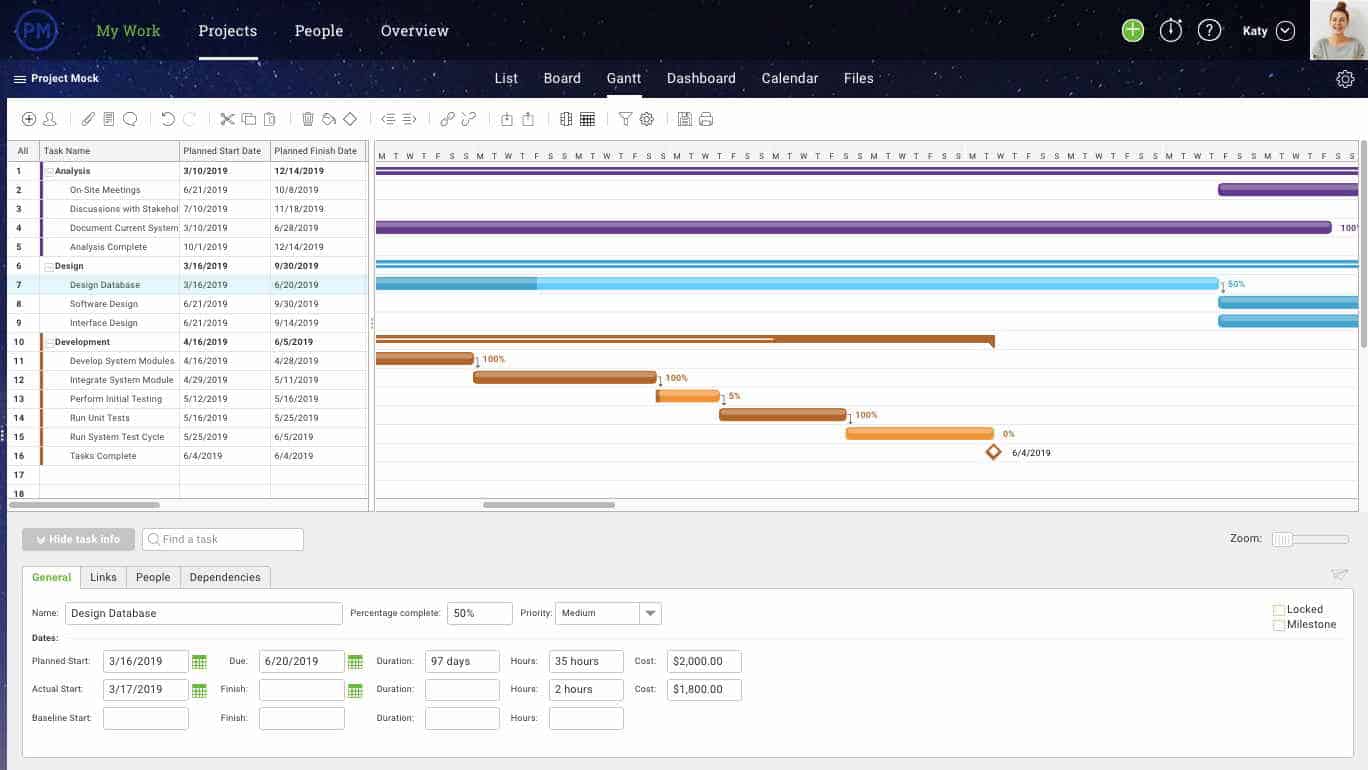 Gantt charts present a powerful visualization tool that helps to drive projects forward. While they’re perhaps most-used today for top-level planning, many teams also deploy a hybrid approach, combining sprints and Gantt timelines to great effect. This makes it fast and easy to set deadlines and to see how projects are progressing – while still following the Agile methodology.

After all, half the challenge of tackling a problem is to identify and define it – and it’s exactly this power that Gantt charts bring to project management.

Moreover, if you are interested in customizing Jira workflows for specific requirements, then you might want to check out this guide to building a Jira workflow for Scrum.

What tips and tricks do you use for working with Gantt – or is there anything that we’ve missed? Let us know in the comments below.