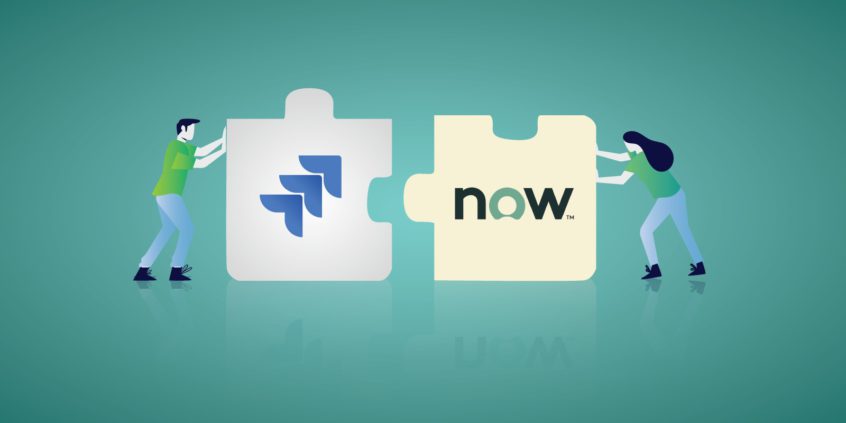 As companies grow, the need to integrate data between different platforms becomes more inevitable. For instance, if you’re working in ServiceNow and you have a partner or a client who uses Jira, then a ServiceNow Jira integration seems to be the best solution for seamless collaboration.

So in this guide, we will discuss the need to integrate ServiceNow Incidents with Jira Issues. (Although this process can also be applied to other entities, like Problems, Cases, Change Requests, etc.)

We will cover why admins set up the ServiceNow Jira integration in the first place. How to choose the right technology to configure the integration. And we will cover the step-by-step process on how to set it up.

Note: in this tutorial, we will be using an integration tool called Exalate to set up the integration. You will learn more about this, as well as other integration options, throughout this guide.

Here is an overview of what we will cover:

Why Integrate ServiceNow with Jira

Thinking of IT Service Management, ServiceNow has become a mainstream choice for CIO’s & the head of IT departments to consider.

Started as an innovative niche cloud platform to manage ITSM processes based on ITIL best practice, ServiceNow has gained enormous traction in recent years. They currently have more than 20.000 customers world-wide & are growing rapidly.

On the other hand, when thinking of Agile Software development, Jira sprints in mind immediately.

With the above positioning of ServiceNow & Jira in the IT Service Management & Software development space in mind, the need for integration becomes obvious.

How to Choose the Right Technology for Setting up your Integration

When designing an integration between two ticketing tools, three aspects always need to be considered:

For this guide, we’ll set up the integration using Exalate. Precisely because Exalate was built to fulfill the above requirements. And it meets the criteria for the described ServiceNow Jira integration scenarios.

In the chapters below I will show you how Exalate addresses the above aspects in more detail. But first, let’s go through the step-by-step process on how to set up the integration!

Step 1: Install the Exalate app on your ServiceNow Instance

To install Exalate on your ServiceNow instance, you’ll have to use an “update set”.

You can find the step-by-step instructions of the Exalate agent installation for ServiceNow on the following Exalate documentation page:

Installing the Exalate app on your ServiceNow instance

Step 2: Install the Exalate app on your Jira Instance

In order for Exalate to work, it needs to be installed on both sides of the integration.

This means you’ll also have to install Exalate on Jira. This will be the straight forward process as installing a Jira app.

You can find the step-by-step instructions of installing the Exalate agent on your Jira instance here:

Step 3: Have a Quick Look at the Exalate Console

The Exalate console provides a user interface for system administrators to configure & maintain the Integration.

After installing, the Exalate console should be directly accessible as an Application on the ServiceNow instance:

At the Jira side, similar configuration options are provided as an Application as well:

With the Exalate console you can, on the one hand, create/maintain your configuration. On the other hand, you can also view Sync Queues and check/resolve errors.

These capabilities will help to maintain the integration efficiently.

But, let’s move on to setting up a connection between your Jira and ServiceNow instance.

Step 4: Establish a Connection between Jira and ServiceNow

Once the Exalate agent is installed on both ServiceNow & Jira, you need to set up connections between the two Exalate agents.

Below you have step-by-step instructions to set up the connection between the two systems:

But here’s a recap of what it boils down to.

You’ll first have to Initiate a connection in the Connections tab.

You’ll then have to choose the connection type. That’s either connecting with the other side that’s accessible or not accessible.

Then you’ll have to choose between the pre-existing sync rules templates. Don’t worry about configuring this or selecting the wrong one. You’ll be able to edit this later. We’ll get back to this in step 6.

The only thing left to do here is to pick a connection name and “Initiate Connection”.

Quick note: you can toggle the Active option on and off, which means you can prepare a connection before you have a need for it.

This will generate an invitation code. You’ll have to copy this so the other side can accept the invitation.

That code you’ve just generated is what you will use to accept the invitation on the other side. So, move over to the other side, go to Connections and Accept Invitation.

Go ahead and past the code there:

The code will validate automatically once you’ve clicked Next.

Your connection type will be set automatically based on the invitation.

You’ll be able to configure the sync rules for this side separately, from the other side. This has been done on purpose, so each side will remain autonomous.

After you’ve accepted the invitation and a connection has been established, we can move on to setting up a rule that will serve as a trigger for the synchronization.

Step 5: Configure your Synchronization Triggers to Determine when to Sync

Once a connection between ServiceNow and Jira is established, the main work of integration can start.

Have both sides agree on synchronization rules

At this stage, close cooperation between the Incident/Issue manager is needed to determine when an Incident at the ServiceNow side needs to create an Issue at the Jira side or vice versa.

The agreement can be defined on ServiceNow Exalate & Jira Exalate independently, allowing all possible scenarios. However, it’s also possible that you’re an admin on both sides.

Set up an automated synchronization trigger

If the process managers have determined that whenever an Incident is assigned to an Assignment group called Jira ServiceDesk, an Issue needs to be created at the Jira side.

The Trigger defined in Exalate ServiceNow looks like the following:

If, at the same time, they also agree that whenever an Issue at the Jira has IssueType ServiceNow, it will create an Incident at ServiceNow for teams on ServiceNow to solve.

The Trigger defined in Exalate Jira looks like the following:

Step 6: Configure your Connection to Determine the Information to Send

Once an Incident on ServiceNow fulfills the conditions defined by the Trigger, the ServiceNow Exalate will receive access to the Incident through the REST API.

What information is sent to the Jira Exalate is defined in the Connection Sync Rules -> Outgoing sync. 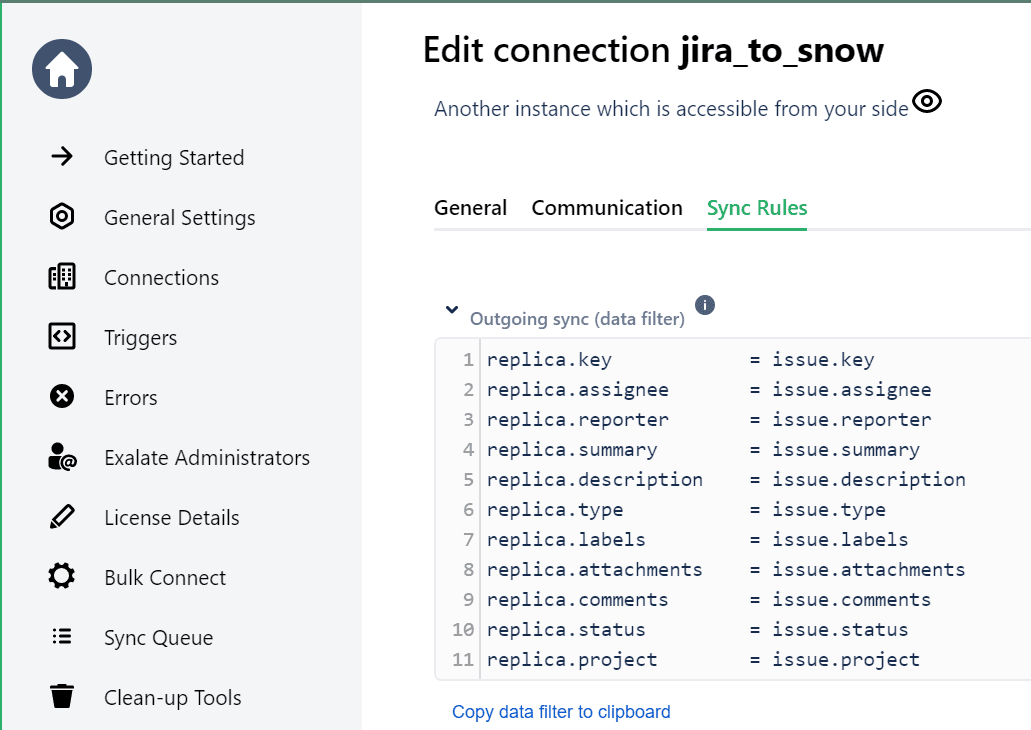 The above example is an out-of-box, straightforward mapping. However, more complex mapping can be defined using groovy scripts in this section as well. Exalate provides a number of Script Helpers to reduce the effort to script yourself.

The incoming sync will determine how to interpret the information received.

The rules on how to interpret the incoming data are configured in the Connection Sync Rules as well.

On the ServiceNow Exalate, there is a distinction for when an Incident is created or updated. 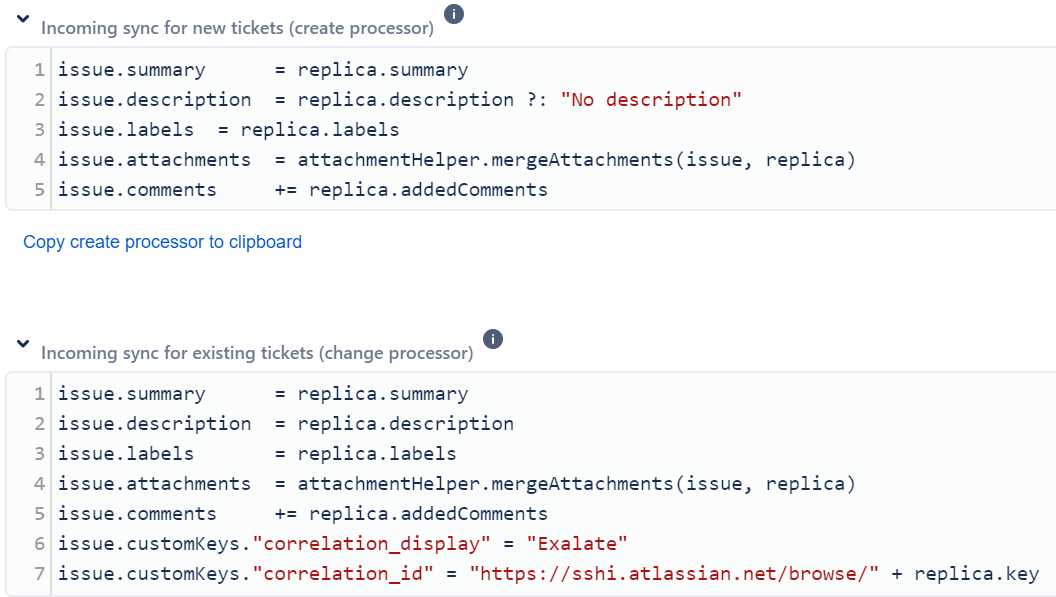 Just like with outgoing sync rules, more complex mappings can be scripted.

Below is an example of mapping the ServiceNow Incident States with the Jira Issue Status. (Again Exalate Script Helpers can help reduce the scripting effort.)

Additional Information on Exalate as an Integration Solution

Since we used Exalate to set up the Jira ServiceNow integration, you might have some questions about this solution.

On Autonomy in Architecture

The basic architectural setup of Exalate as integration enabler between two systems is depicted below:

In our scenario Tracker (Blue) would be your ServiceNow instance, Tracker (Red) would be the Jira Server or Cloud instance.

Exalate is an intelligent middleware that transports data between ServiceNow & Jira.

The Security consideration is described in great detail in the following whitepaper, free for download: “Exalate Security and Architecture Whitepaper”.

The below image explains the different deployment models Exalate is supporting.

Exalate for ServiceNow can be deployed either in the cloud or on-premise. 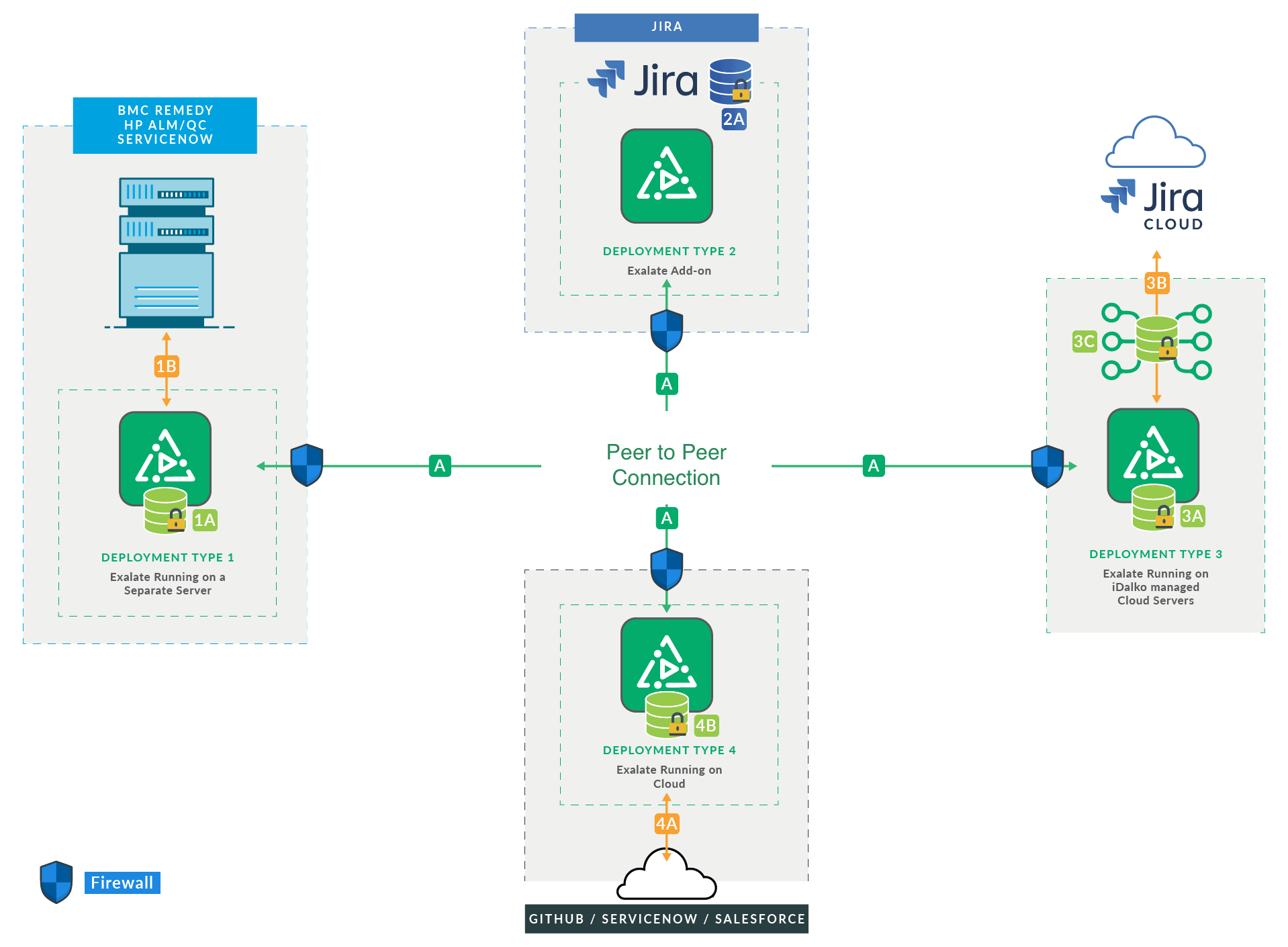 Comparison between Exalate and the IntegrationHub with the Jira Scope

ServiceNow itself has a capability called IntegrationHub that allows reusable integrations with third-party systems and call them from anywhere in the ServiceNow platform.

Using the IntegrationHub requires you to get a separate subscription.

The Standard package of IntegrationHub includes a Jira Spoke with a (limited) number of Actions that allows ServiceNow to manage issues, users, stories, and groups in Jira. And it retrieves Jira data to use in a flow.

So, why use a third-party tool, like Exalate, to set up the integration?

Below I’ve added some considerations:

Many ITSM-teams adopt ServiceNow as a best-in-class solution. While development and Project Management teams still widely consider Jira as the ideal solution.

As efficient collaboration is crucial for any effective organization, integrations between these systems are increasingly common.

When considering the right technology to set up the integration, it’s import to keep into account the following three aspects:

In this guide, we’ve set up the integration using Exalate. And we’ve described the step-by-step process on how to complete this integration. 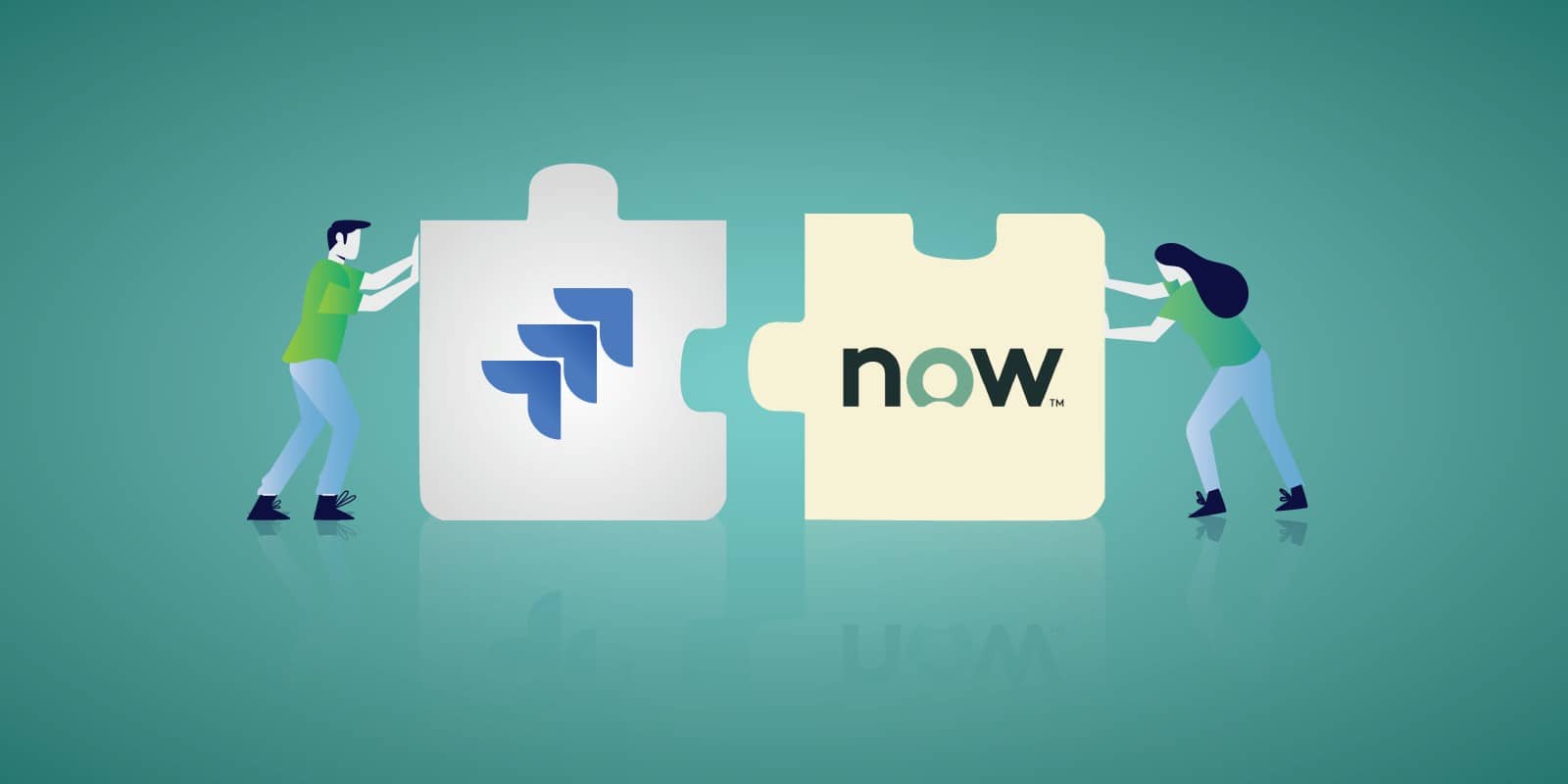