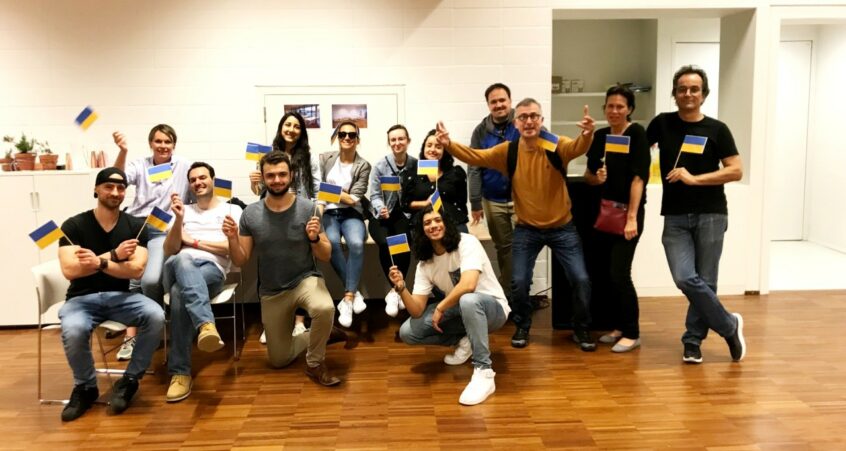 This article was written by Mariia Onyshchenko, Partner Manager at iDalko.

We had big plans for this year’s team-building event at iDalko. We wanted to gather all idalkonians from all over the world to celebrate our 10-year anniversary, as well as our big and small wins, and simply to spend quality time together.

Sadly, the war in Ukraine, where half of our team is located, and also where my home is, has disrupted our plans. Rather than cancel the event, our team decided to turn it into a fundraiser in support of Ukraine instead.

Since moving to Belgium and specifically the Flanders region, I’ve learned that Belgians are highly intelligent and very eager to show off their knowledge. Jokes aside, they really enjoy doing “quizzes”. If you are anything like me, you’d need an explanation: a quiz is a gathering in which a host asks questions and a certain number of teams respond. The team with the most correct answers is the winning one. And gets a prize. That is quite an important part. There are amateur events and big quiz leagues.

My colleague Manuel Pattyn had the brilliant idea, and I know he’s taken hundreds of quizzes himself.

To make the event a success, we had to give roles and responsibilities to our team members.

For me, as a true Ukrainian matron, cooking was a natural choice. But cooking for over 80 people would be my first time doing so. How to calculate the amount of ingredients? In the end, how much food will we need?

But it turned out to be a lot of fun because I’m an excellent planner, I was working for a cause I care deeply about, and I could count on the help of my talented mates Dafina & Yasemin. After just six hours of preparation, we were ready to feed our quizzers.

Other teammates were also quite busy. Ann Van Raemdonck and Francis Martens (who is also the CEO of iDalko) were running the bar, Hilde Van Brempt (CFO and co-founder of iDalko) was in charge of the cash register, and Manuel Pattyn (Head of Business Unit and Consultancy) was the host of the quiz.

None of the job titles mattered that day. We were all working toward the same goal, and we weren’t afraid to handle anything that was “dropping off the table” (Manoosh, Mariana, Kamal, Tommy, Guillaume, thanks!)

But I will tell you that one once: for some reason it was pretty satisfying to see our VP of Marketing, Stefaan Quackels, my direct manager, washing dishes and waiting tables. 😁

Special thanks go to Mathy Vanvoorden, who spent numerous hours preparing the quiz itself. After this, I believe that Mathy can claim the status of honorary Ukrainian.

The atmosphere was intense but warm and friendly. Many people dressed in blue and yellow to express their support.

Huge thank you to everyone who came, who helped, and who sponsored.

In addition, working alongside my colleagues in such an unusual setting was truly exhilarating.

The food was gone, and the drinks were emptied. The event went off without a hitch.

I am so proud of our team. I am proud to be Ukrainian and Idalkonian.